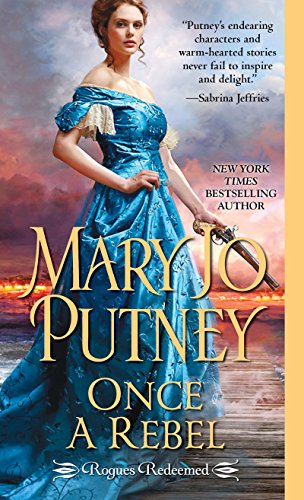 Synopsis: As Washington burns, Callista Brooke is trapped in the battle between her native England and her adopted homeland. She is on the verge of losing everything, including her life, when a handsome Englishman cuts through the violent crowd to claim that she is his. Callie falls into her protector's arms, recognizing that he is no stranger, but the boy she'd once loved, a lifetime ago.
Lord George Gordon Audley had been Callie’s best friend, and it was to Gordon she turned in desperation to avoid a loathsome arranged marriage. But the repercussions of his gallant attempt to rescue her sent Callie packing to Jamaica, and Gordon on a one way trip to the penal colony of Australia.
Against all odds, Gordon survived. Finding Callie is like reclaiming his tarnished soul, and once again he vows to do whatever is necessary to protect her and those she loves. But the innocent friendship they shared as children has become a dangerous passion that may save or destroy them when they challenge the aristocratic society that exiled them both . . .

Best friends George Audley and Callista Brooke try to escape their horrid childhood homes by eloping at age 16.  When that plan fails Callista is married off to a friend of her father and moves to his home in Jamaica.  She's told George died.  Resigned to her new life, she tries to make a difference in Jamaica- including trying to convince her husband to free his slaves.  One of those things he 'means to get to', it does no one any good when he drops dead before registering a new will.  Callie leaves with her husband's two illegitimate children by a slave and their grandparents.  They work hard to build a new, free life in Washington D.C. and seem to be succeeding- until the British invade!

George (now going by Gordon) never got along with his father or 2 older brothers, but when his father charges him as a horse thief and sends him to Botany Bay for the attempted elopement with Callie, he doesn't bother to keep in touch after gaining his freedom.  Gordon leads an adventurous life, often getting himself into dangerous circumstances- like nearly being shot as an alleged spy during the Peninsular campaign. He considers himself a problem solver who helps people who can't help themselves and it is in that spirit that he agrees to travel to America to try and find a widow and reunite her with her English family before she's hurt in a war zone.  He's shocked when the widow turns out to be Callie! Their easy friendship picks up as if they'd never been apart, but through the trials and dangers of escaping the British bombardment of Washington D.C. and Baltimore, they begin discover deeper emotions. And that may be the only thing that gets them through returning to England.

Once a Rebel goes where few historical romances I've read have gone before- America during the War of 1812.  More specifically, the burning of Washington D. C. and the navy's bombardment of Baltimore.  I found Mary Jo Putney's weaving of fiction and fact seamlessly blended in a wonderful style that brought the dangers of war to a very human, and imaginable, level.  Callie and Gordon are wonderful, three-dimensional, realistic characters who have learned that the world isn't always a good place, but they haven't allowed that to harden them against the possibility of love and future happiness.  They come to realize that this is the right time and the right place for their relationship to flourish, and they are perhaps a stronger couple now than they would have been had they eloped all those years ago.  Once a Rebel is also unusual in that most books including battles the hero (and often the heroine) purposefully engage in the fray in some fashion.  But here we see the fighting only from the perspective of civilian by-standers. What were the civilians doing in Baltimore to prepare themselves for possible invasion?  What was it like to listen to the bombing of Fort McHenry all night, without knowing what the outcome was until the sun rose the next morning?  Between Callie and Gordon's experience and a brief cameo by her lawyer Francis Scott Key, the emotional poignancy of the Star-Spangled Banner took on a whole new meaning for me.

Of course, there are more problems for Callie and Gordon to get through than a simple war, and Putney does an excellent job of showing the personal and emotional impact each problem and change has on them both.  Both Callie and Gordon have to question their definition of themselves, of family, of love, and what they are wiling to do to protect those things.  In facing each of the challenges that come their way, we watch them grow and develop in relatable ways, and grow as a unit, facing problems together- which is often something that doesn't happen until the very end in romances.

Like its predecessor Once a Soldier, Rebel is an engaging and well-written story with great characters.  An especially excellent sense of time and place and history brings wartime America to life in all the best possible ways.  A must read for Mary Jo Putney fans, and historical romance fans in general!

I received an ARC of this book from NetGalley in exchange for an honest review.
Posted by Anne Morgan at 11:30 AM

Anne Morgan
I'm originally from New Orleans, LA. A graduate from Simmons College with a Master's in Library Science and a specialty in Archives, I'm now a Curator and Archivist, specializing in designing and developing new museum exhibits. I'm also a freelance editor, proofreader, and writer.

Most Popular Posts of All Time