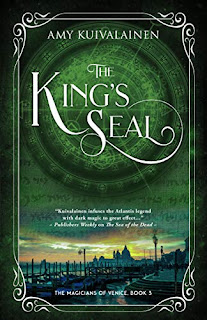 Synopsis: The search for the legendary ring of King Solomon has begun, and Penelope must sift through its long and convoluted history of lost emperors, crusaders, and other famous historical figures—including one with whom the magicians share their own complicated past— if she hopes to find it in time.

As Penelope's magic continues to grow stronger with the coming high tide, she and Alexis will have to depend upon each other more than ever to keep everyone they care about safe from the continuing attacks by Thevetat’s priests.When the magical high tide finally peaks, the long-awaited battle against Thevetat will begin, and Penelope, Alexis, and the magicians will have to rely on both powers of old and new if they hope to defeat their enemy once and for all.
_______________________________________________________________
The King's Seal is the third and final book in the Magicians of Venice trilogy- here Penelope and the magicians must find the Ring of Solomon to help them defeat Thevatat and his plan to not only provide a body for himself but also unleash more demons on the world. Penelope learns more about the complicated histories of her friends, meets an emperor, and begins to try and understand her place in this magical world- which includes understanding powers of her own.
The Magicians of Venice is definitely a trilogy that should be read in order. Each book builds on the other as pasts are unveiled, alliances formed, and the danger Thevatat and his followers presents build to the ultimate climax. But it isn't all terror at the coming fight. Like in The Immortal City and The Sea of the Dead, Amy Kuivalainen takes time to develop her cast of characters and provide bits of the joy, awe, and sorrow that must come from being immortal. Meeting the emperor Constantine brings up emotions from all of the magician's pasts and when the Sforzas and Medicis are brought into the mix we get to see Phaidros and Aelia at some of their most emotional states (both for better and worse). Thankfully in a house of magicians there's always someone able to put the thrown china and other breakables back together.
I enjoyed the continued thread of Phaidros and Aelia in their will-they-won't-they relationship, especially since we finally get to see Aelia at her most vulnerable and hear why they haven't gotten together when the two of them seem to be the only ones who don't realize they are in love with each other. With the continuing threats Alexis is at some of his fiercest Defender moments, but there are also delightfully sweet and tender scenes with Penelope as she helps him remember the good that was Atlantis and not just the wars. Penelope continues to be her strong and stubborn self, refusing to be overawed by ancient magicians or murdering demons.  She and Marco take things in admirable stride, no matter what weirdness gets thrown at them. Constantine helps shake things up but also helps bring together the final battle and fits well into the mix.
At first reading I thought the final battle was a little anticlimactic, but after thinking about it for a few minutes I changed my mind. No spoilers here but I think it ended exactly the way it should have.  In the end, life goes on and learning to celebrate the joys as well as the sorrows is something even immortal magicians need to learn.  Kuivalainen wrapped things up beautifully, but maybe we can still hope for more in this world of hers. Constantine may be a jerk at times but would be an interesting spin off, as would focusing on some of the magicians we get less of like Zo or Galenos and Lyca  Even more interesting would be going back to Atlantis and the first wars that ended the island. But even if this is the last book Kuivalainen writes in this world, it is certainly a world we can be grateful we can return to any time, just by picking up the books. It is certainly one I plan on returning to frequently.
I received an ARC of this book from NetGalley in exchange for an honest review
Posted by Anne Morgan at 11:11 AM

Most Popular Posts of All Time